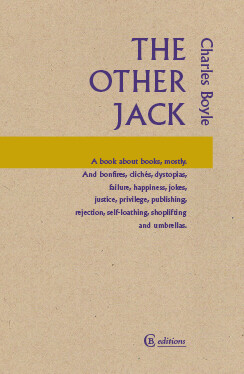 The Other Jack by Charles Boyle

The Other Jack by Charles Boyle

My granny used to say, when she saw me getting teary over a film we were watching on TV, ‘It’s only a story.’ When Robyn’s bike was stolen and I offered sympathy, she responded, ‘It’s only money.’ A woman once said to me, grinning from ear to ear, ‘It’s only sex.’ To someone despairing of the judges’ decision, I want to say, ‘It’s only a book.’ But it is never only anything.

Writer and reader meet in cafés to talk about books – that’s the plot. There are arguments, spilt coffee, deaths both in life and in fiction, and rain and laughter.

‘It’s like being in the company of a beloved friend who’s had a bit too much to drink (maybe) and wants to share a lot of nonsense which, perhaps, is not so nonsensical as it seems ... This is a gem.’

– Nicholas Lezard in the Guardian on Jack Robinson, a pen name of Charles Boyle