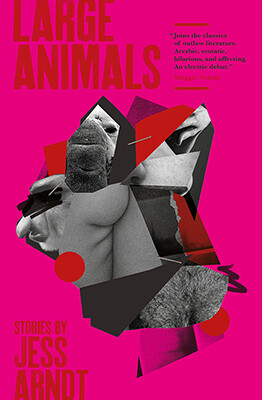 In 'Moon Colonies' the narrator's disconnect with their body leads them on a masochistic gambling spree. In 'Jeff', Lily Tomlin mistakes Jess for Jeff, triggering a hilarious and unhinged identity crisis. And in 'Contrails', a character calls each of their ex-lovers the night before surgery, confronting a gut-twisting fear of becoming non-existent.

Visceral, and often disconcerting, Large Animals sets a new standard for language, challenging our concepts of gender and body in a way that feels radical, insightful, and incredibly relevant.

“Everything in Jess Arndt's Large Animals veers towards the supernatural. Everything is strangely bodily and shape-shifting. Hugely original, this debut is wild.”

“…joins in with the classics of loaded, outlaw literature… this is an electric debut.”

“Jess Arndt has crafted a queer uncanny, an eerily recognizable landscape of dark magic and darker humor where the instability of bodies, desire, relationships, and the self take on a supernatural dimension. A tremendously exciting collection.”

“Each time I pick up a book, this is the voice I’m hoping to hear. Honest, agitating, queer, visionary. Arndt refuses binaries, haunting the space between. The pleasure of Large Animals is in the bite.”

- Justin Torres, author of We the Animals

“Metamorphosis – of time, of space, of character – is exposed in every playful sentence of Large Animals. Language will not be kept in its form… a strange and beautiful must-read.”