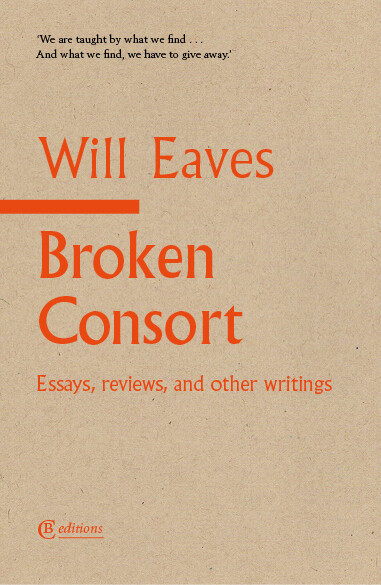 Broken Consort by Will Eaves

Broken Consort by Will Eaves

Essays, reviews, and other writings.

Broken Consort is a chronicle of close attention (to books, films, plays, paintings, music, notebooks and car-boot sales) which will confound anyone who thinks rigour and generosity are contradictory. It includes an account of the evolution of the author’s prize-winning novel Murmur, an essay on Daniel Defoe’s Journal of the Plague Year, and practical reflections on the business of writing.

‘“At the heart of writing is curiosity,” writes Will Eaves in his essay on “Making Books”. Curiosity may fuel every writers heart, but very often it’s coffee that powers the writer’s mind. When all the coffee runs out, we will be even more grateful for Will Eaves and his essays – each one a shot of artistic adrenalin and a euphoric psychostimulant.’

– Nancy Campbell, author of The Library of Ice

‘“Who do I think I am, wandering about looking for links between things?”, asks Will Eaves in these rich essays drawn from a career as as an editor and critic, novelist and teacher of creative writing. A broken consort, in Renaissance music, is an ensemble in which instruments from different families are combined. Eaves’s roaming ear is reliably true ... Broken Consort is that rare book of criticism: one that tells the truth about the limitations of both reading and writing.’