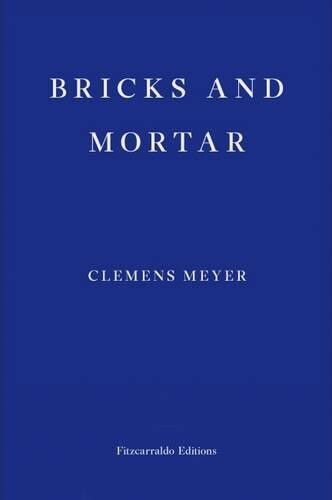 Bricks and Mortar by Clemens Meyer

Bricks and Mortar is the story of the sex trade in a big city in the former GDR, from just before 1989 to the present day, charting the development of the industry from absolute prohibition to full legality in the twenty years following the reunification of Germany. The focus is on the rise and fall of one man from football hooligan to large-scale landlord and service- provider for prostitutes to, ultimately, a man persecuted by those he once trusted. But we also hear other voices: many different women who work in prostitution, their clients, small-time gangsters, an ex-jockey searching for his drug-addict daughter, a businessman from the West, a girl forced into child prostitution, a detective, a pirate radio presenter...

In his most ambitious book to date, Clemens Meyer pays homage to modernist, East German and contemporary writers like Alfred Doeblin, Wolfgang Hilbig and David Peace but uses his own style and almost hallucinatory techniques. Time shifts and stretches, people die and come to life again, and Meyer takes his characters seriously and challenges his readers in this dizzying eye-opening novel that also finds inspiration in the films of Russ Meyer, Takashi Miike, Gaspar Noe and David Lynch.